One of the biggest things you learn in college is the value of communication. Whether in personal relationships, with teachers, or with your first employers, having communication is key to conflict resolution and healthy environments. In this MyDorm blog, we hear a funny story from Anonymous from SDSU who made an unlikely friend.

“To begin the story, I first need to set the stage. It’s Junior year, and I’m living in a top floor apartment by SDSU with three roommates. There’s a trolley stop down the road which we use to ride into campus. My roommates & I had a loud 1k+ watt sound system and would throw the occasional college party. One thing we noticed when we were playing music loudly was a banging sound coming from our floor. It sounded as if someone was hitting the ceiling with a broom! When we turned down the volume, the banging would stop. This would continue for weeks, until one fateful day that I rode the trolley.

While waiting for the trolley as usual, a girl that I saw regularly waiting at the same time approached, and we engaged in small talk. The conversation took a turn something along the line of the following:

Me: “so you live in these apartments too huh?”

Me: “I’m in the north east corner at the top floor.”

Her: “Oh, I’m on the north east side too! How do you like living there?”

Me: “It’s pretty good, there isn’t as much social life as on campus but we occasionally throw parties. Anytime we play loud music though there’s this banging sound that comes from downstairs. Can you believe that? It sounds like someones hitting the ceiling with like a broom or something. Anyways, how do you like it?”

Me: “So you’re actually hitting the ceiling with the broom??”

And that’s when I found out that she was the one responsible for the banging nose, and she found out I was responsible for the loud music. In traditional college fashion, I invited her over to future parties and tried to stay more quiet. Unfortunately being the balcony beneath ours, it also meant at some parties if someone threw up over the balcony, it landed in their balcony beneath us. Regardless, we became good friends. Ahhh, college.” -Anonymous

Find this content useful? Support us by checking out our other hand curated top 10 lists!

So, You Got to the Dorm Room First
DormEssentials Jan 03 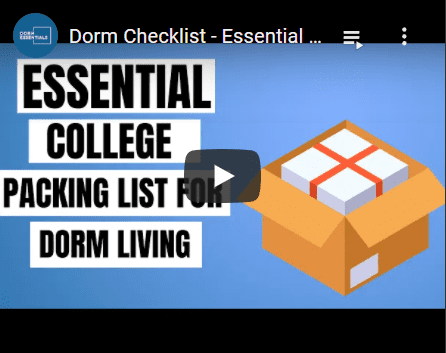 Advice to Land & Succeed at Your First Internship or Job

This site is a participant in the Amazon Services LLC Associates Program, an affiliate advertising program designed to provide a means for sites to earn advertising fees by advertising and linking to Amazon.com. We are compensated for referring traffic and business to Amazon.

GOING TO BE LIVING IN THE DORMS?

Check out our dorm essentials checklist!